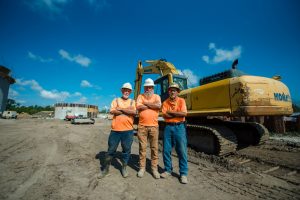 “You will not find another company that takes care of you like T.A. Loving does… If you do your job and do it right, they will always look out for you, even when times get tough.”

This is advice from Tony Humphrey to the younger generation just starting their careers. Tony Humphrey has worked at T.A. Loving for 52 years; the length of his career surpasses that of anyone else at the company. He is one of the four Humphrey brothers, all of whom followed in their father’s footsteps and found their footing at T.A. Loving.

Dewey Humphrey was young when he returned from the Invasion of Normandy in World War II. An Army veteran, he started the Humphrey legacy at T.A. Loving in the 1940s. At the time, T.A. Loving was supporting the war effort by building military facilities in North Carolina and beyond. It was only a matter of time until his three sons— Tony, Edgar and Timmy—began working at T.A. Loving. The first was Tony, at the age of 16 in 1966. He started out as a pipe layer and has now been a foreman in our plant and pipe divisions for the past 8 years. Edgar joined the company in 1971, and Timmy joined in 1986. Ronnie started his career at T.A. Loving until he started his own masonry company. Together the Humphrey brothers have worked on projects across North Carolina, South Carolina and Virginia. The brothers’ uncles, Woodrow and David Humphrey also spent much of their career working for T.A. Loving.

The Humphreys have witnessed it all when it comes to the history of T.A. Loving and the construction industry overall, from the days when pay grades started at just $1.25 an hour and the newly passed OSHA Act of 1970 was reshaping safety culture on construction sites throughout the nation. They can dig up all sorts of historical artifacts and stories from their decades with T.A. Loving, from challenging jobs to the challenges of working with pay phones, CB radios and pagers to communicate on site.

As natives of Jacksonville, NC, the brothers spent most of their time working between Camp Lejeune and Wilmington. Tony says he remembers when the Porter’s Neck area was a ghost-town,­­­­ no restaurants or stores— just a two-lane road called Highway 17. He and his crew installed a 25-foot deep manhole at the intersection of Market Street and Porter’s Neck Road. They also installed the original pipe infrastructure for the Landfall and Echo Farms communities. Dewey Humphrey, the Humphrey patriarch, drove the piling foundations for New Hanover Hospital in 1967.

One of Tony’s most interesting and challenging projects, he recalls, was installing a raw water line from Nags Head to Manteo on Roanoke Island. His crew worked on barges to install the pipeline. He also remembers working on a large diameter pipeline project in New Bern, NC. During a time when there were no directional boring machines, Tony and his crew worked inside of the pipe by hand digging the front face of the pipe to push the pipe through.

Many may wonder what has kept the Humphreys around so long; the Humphreys will assure you it’s a matter of the company’s culture. Tony’s motto has always been to work to the best of his ability as if he owned the company himself, and since the beginning, Edgar has referred to T.A. Loving as “my company.” He considers the company to be his family and maintains that he’s always been treated the same way in return.

T.A. Loving has been blessed with many like the Humphreys: hard working people that have stuck with us for generations. Many of our employees are legacy employees, and we are proud that they’ve chosen to pursue their careers with us. That kind of dedication is worth more than anything. T.A. Loving would like to offer a sincere thank you to the Humphrey family for their many years of service and loyalty; we could not be more grateful to have them on our team. #lovinglife #lovingpeople #lovinglegacy #lovingcommunity

What can we help you with?
Want to work with us? Click here to view our current openings